Lord Patrick Beresford travelled to Ethiopia with The Ultimate Travel Company and discovered a country rich in ancient history and culture.

"I found the Ethiopians a delightful people, smiling, welcoming and most anxious to please. Punctuality and alacrity of response are not however always noticeable amongst their virtues, yet everything, barring changing Birrs back into dollars or sterling on my departure, went without any major hiccups.

Contrary to my expectations, the excellent guide Haptamu remained with me throughout, apart from two days in Lalibela, where he was replaced by the equally affable Manfis, whose pronunciation was actually much easier to understand. I was intrigued to learn that 55% of the population are Christian Orthodox and only 25% Muslim, the remainder being a mixture of other faiths. It is not however possible to judge a person’s persuasion by their dress and behaviour, since the Christians seem to espouse Muslim robes and, for instance, their method of prayer – heads down, bums up – and their insistence on footwear being removed before entering “holy ground” – sometimes over 50 metres from the church itself. The Orthodox priests, bewhiskered and wearing short stove pipe hats, reminded me of their Greek Cypriot counterparts, not my favourites as they were invariably covert supporters of EOKA violence, though in Ethiopia they are now allowed to be married. This was certainly not the case in Cyprus, where a photograph of Archbishop Makarios sodomising a goat reputedly enabled British Intelligence to blackmail him into eventually coming to terms with the British Government. 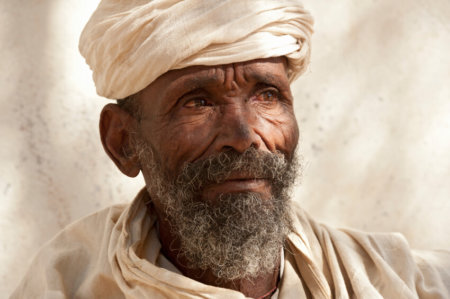 Many Ethiopian youths wear tee-shirts of vertical green, yellow and red stripes, the colours of their national flag, on which is superimposed the Star of David, not apparently out of any allegiance to Judaism, but as a symbol of religious tolerance. Young women move with an easy grace, their long slim legs would be the envy of most top models, and their beautiful dark features, devoid of thick lips and flared nostrils, are more Aryan than Negroid.

The Division of Abyssinia into Ethiopia and Eritrea has left the former without access to the sea, consequently on the road north out of Mekele we encountered many huge lorries coming from or heading for the Eritrean border. Local transport consists mainly of adorable little donkeys, too small to be ridden and often grossly overloaded, but mainly looking in good condition, horse or mule drawn carts (horses pathetically thin and often woefully lame), camels – as many as 12 tied head to tail – and of course humans, women generally, carrying more than men, as seems often to be the custom in fundamentalist Islam. The same seemed to apply to work in the fields. 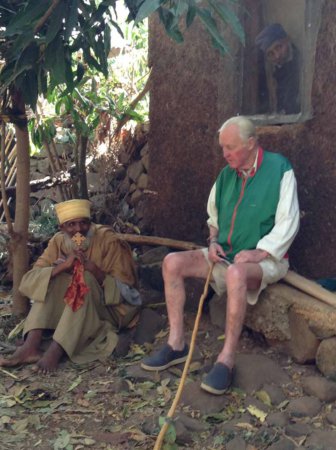 Of the seven hotels I stayed in, the Planet Hotel in Mekele was probably the most expensive and certainly the most disappointing, for instance the much – vaunted Spa Pools were stone cold and dirty, despite repeated assurances, my wake-up call never came, and sleep was inhibited by two particularly strident Muslim calls to prayer at 02.15 and 05.45 hrs. The rock churches are indeed remarkable works of architecture, comparable to Petra, but being generally situated on the peak of a mountain, exhausting to reach. The combination of age and altitude – my age (81) and the Northern Ethiopian altitude (6000 to 11000 feet above sea level) nearly proved my undoing, and there were many times when I felt I was really attempting a bridge too far! At each rock-church we visited, I asked about the frequency of services, and was told (with one exception) every day from 05.30 to 08.30, with congregations of approx 100, and on Sundays and holy days 05.30 to 10.30, with congregations between 500 and 1000. These figures I took with a pinch of salt, despite their consistency, but they may well be accurate. There is no seating, women stand to the right of the aisle, men to the left, and the altar steps and altar are only available to priests and deacons. Thank goodness you had headed me off the rope ascent at Dabradas, the prospect of which had first attracted me to Ethiopia! 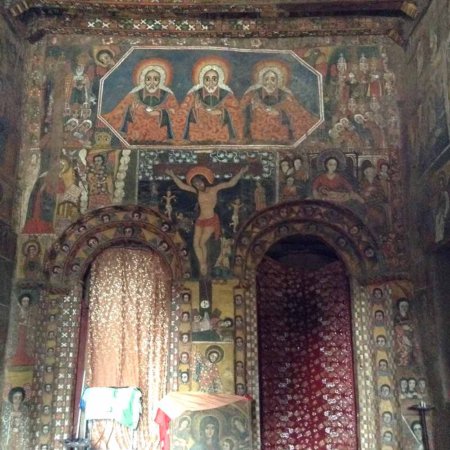 The road from Mekele to Gheralta Lodge, and on to Axum is mainly a dust track constructed by Italian Engineers during the Italian occupation 1936 – 1943, running due west through truly spectacular country, sometimes carved out of the side of a Mountain, with a wall face on one side and a precipitous drop on the other, sometimes following a ridge, with precipitous drops on both sides. The rugged sky-lines have to be seen to be believed.

Of wild life I saw little – a couple of velvet monkeys in the distance and a stoat-like animal scuttling across the road, and of bird-life many birds of prey, pigeons, doves and something similar to a crow except with a white ring round its neck. The most common vegetation is of course the eucalyptus, many forms of cacti, including the variety that bears fruit in autumn, acacia and a multi-rooted tree called Crowthorn.

For me the most impressive town I had so far seen was Adua, birthplace of the former Prime-Minister, with its wide avenues and central reservations lined with bougainvillia, jacaranda, palm trees and hibiscus. This we passed through on the road South-West to Axum, home to the immense granite “Stelae” or obelisks, some over 30 metres high and weighing above 500 tons, transported from abroad, according to popular belief, by the miraculous powers of the Art of the Covenant, which, to this day, is lodged secretly somewhere in Ethiopia.

On day five I flew due South to Lalibella, an immensely impressive town with broad avenues similar to Adua’s, and boasting even more exotic trees and shrubs, including the African Pencil Cedar, Junipers and many Olives (of a non-fruit bearing species.) Here I was shown more rock-churches, notably the monastery on the summit of nearby Abune Yosef.

On day seven I flew to Bahir Dar, where Haptamu awaited me, on the South-Eastern tip of the great lake Tana, the source of the Blue Nile. Here the most memorable feature was a four hour boat trip across choppy waters to and from the island monastery of Azua Mariam. 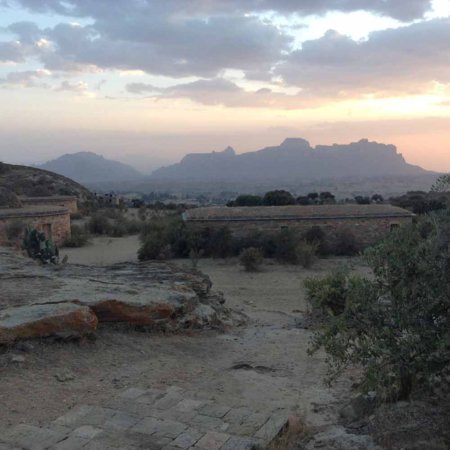 Day eight saw us drive the 180 kms to Gondar on a fast tarmac road, flat except when it zig-zagged over the heavily afforested mountainous passes, the plains being red-soil and fertile. Once again the traffic was predominated by huge lorries, in this case mainly petrol tankers, thundering to and from Djibouti. 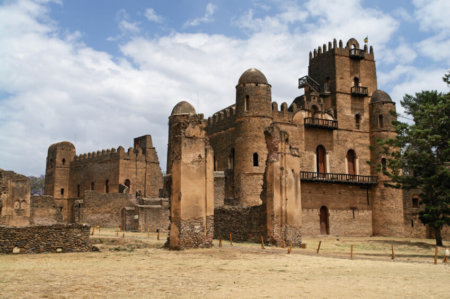 Gondar was once the capital of Ethiopia, its principal historic attraction being the vast “Royal Enclosure", a complex of 12 forts and palaces, and the much more recent (1870) Debre Berhan Selassie Church. Also nearby is the vast (60m x 30m) 500 year-old stone swimming pool, 2.6m deep, and situated near a giant Sycamore Tree of similar age.

As I was leaving the hotel restaurant on my last night in Ethiopia, who should I unbelievably bump into but Richard Dunwoody, friend and former champion steeplechase jockey, and fellow equestrian tour leader for The Ultimate Travel Company, now on a photographic assignment for an Eventing magazine. The odds against this happening must surely have been in hundreds of thousands!

The following morning I flew back to Addis Ababa, and thence overnight to London Heathrow, physically worn out but mentally invigorated by a week’s introduction to this strange and ancient Christian civilisation. Of poverty I had seen plenty, but not of the famine we read about, which must be concentrated in the vast Southern desert regions of the country."