Lydia Craig discovers a country like no other in Africa.

"Namibia is a raw but magnificent mix of desert sea, rugged mountainscape and desolate coastline on a truly epic scale. Because of its size and relatively small population (Namibia is the third least densely populated country in the world), our self-drive safari through this fascinating country really did feel as if we were exploring a new frontier.

Our safari began in Sossusvlei and the red sand dunes of the Namib Naukluft National Park. The highlight here was climbing ‘Big Daddy’, the largest of the dunes, and then running down its steepest face as fast as we dared, egged on all the way by our enthusiastic guide Stephanos from Kulala Desert Lodge. 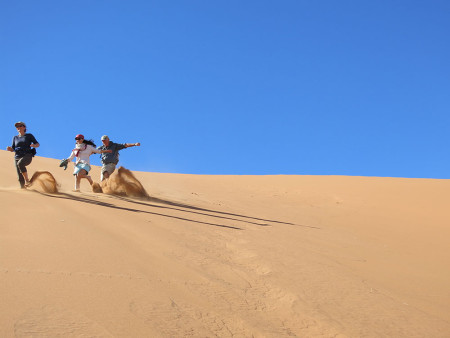 We then headed north towards Swakopmund, a stunning drive in itself through an ever changing desert landscape and then deep river canyons as we neared the coast. A popular beach side resort for Namibians and the ‘adventure capital’ of the country, this German heritage town is bordered by huge yellow sand dunes on one side and the Atlantic Ocean on the other, making it a very unique destination. We spent the afternoon kayaking in the lagoon at nearby Walvis Bay, where we saw dolphins, cape fur seals, pelicans and flamingos. Sadly though we had no time for quad biking and sand dune boarding, which both looked huge fun.

We continued north through Damaraland to Desert Rhino Camp, meeting a desert elephant on the way. These rare creatures are not biologically different to normal elephants but have adapted to their dry and arid environment by having a smaller body mass, longer legs and larger feet, which allows them to cross miles of sand to reach fresh water. We were very lucky to see one.  Later, we joined the morning patrol from camp to track down one of the last free roaming black rhinos in Africa. The area these rhinos roam is vast, and the rangers working for Save the Rhino Trust here are faced with a seriously uphill battle to protect the few that remain. 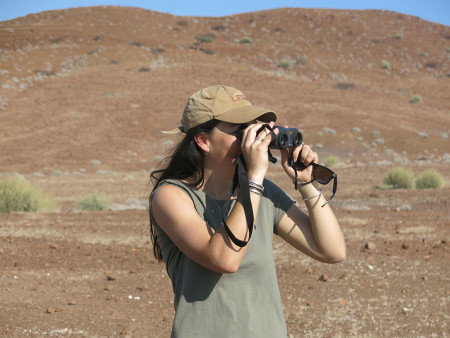 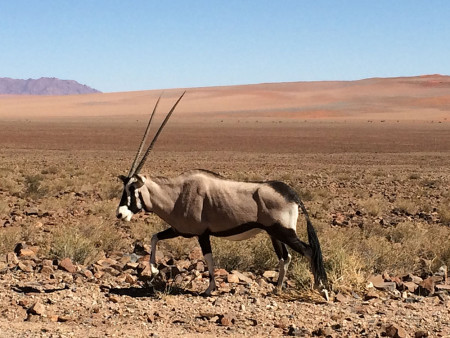 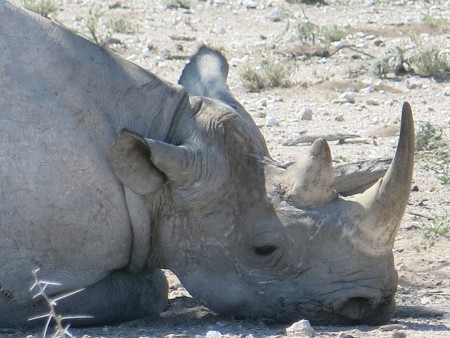 The drive back to Windhoek took us via Okonjima, home to the Africat Foundation which provides for the welfare and rehabilitation of Namibia’s predators on this private nature reserve as well as local community support and environmental education. An altogether different conservation project to Save the Rhino but equally as important and rewarding to see first-hand.

Although Namibia’s dramatic landscapes are definitely the main attraction, and it would not be one’s first choice of destination for seeing wildlife, it was inspiring to learn that no less than 42% of the country has been dedicated to conservation. And if you like the idea of driving your own 4WD vehicle off road through mile after mile of ‘grand emptiness’, then this really is as good as it gets!" 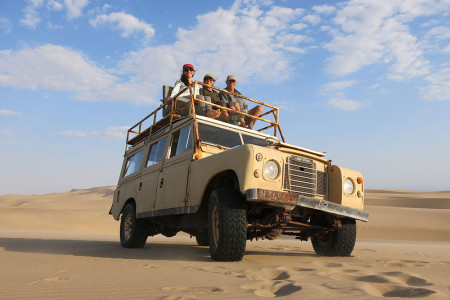 N.B. Lydia loves Africa so much that she has now moved to live there permanently, but our other Namibia experts Tania and Augusta can of course help you with your holiday plans.