Rowan recently returned to Nepal for the first time in ten years.

Ten years on from my last trek into the ‘throne room of the mountain gods’, I ventured back with a certain sense of foreboding. I was concerned that the Solu Khumbu might have changed beyond recognition, with more and more trekkers drawn by the obvious magnetism of the world’s highest peak. Now that I was older, wiser (maybe) but certainly not fitter, how would I cope with the altitude and physical challenge? 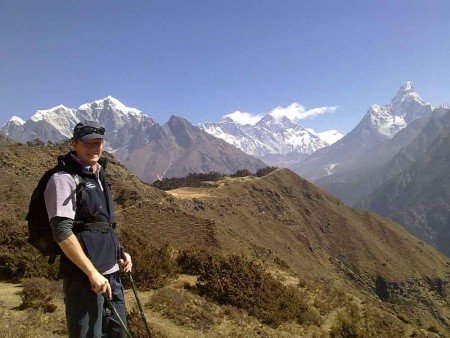 The route took me north from Lukla up the Dudh Kosi Valley to Namche Bazaar, trading capital of the Khumbu, where the terraced rows of stone houses built around the hillside are not unlike a classical Greek theater. Here, an Acclimatization day gave me the opportunity to explore the beautiful Sherpa villages of Khunde and Khumjung before heading on to the village of Thame, at 3,800 meters the high point of the trek and home to a number of Sherpa Everest summitteers including the late Tenzing Norgay. The trail from Namche, which forms part of the old trading route to Tibet across the Nangpa La pass, is little frequented by other trekkers but in many ways showcases the very best of the Everest region. 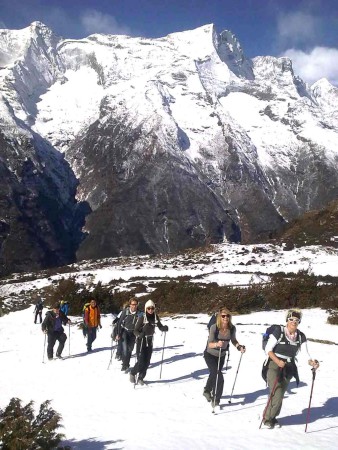 From Thame, we retraced our steps back down through Namche but not before climbing up to the village's stunning monastery - tough going at altitudes approaching 4,000 meters, but well worth it for the panoramic views and for giving the trek a tangible sense of purpose. I admit that I did find it more challenging, significantly so, and yes, things had changed. The notorious airstrip at Lukla had been tarmacked, old wooden planks had been replaced by suspension bridges high above the rivers, villages had grown into small towns and houses were more sophisticated. Starbucks had even gained a foothold!

But the heartbeat and soul of the place, and of course the awesome mountain scenery, had survived remarkably intact. I recognized the Khumbu as I remembered it from all those years ago. There was only one thing I was pleased not to remember...

Last time I had camped in temperatures dropping to 15 degrees below zero at night. This time it was comfortable lodges, electric blankets, flush loos and hot showers all the way.
I felt no shame whatsoever!

Read more about our vacations to Nepal