On Board the Cruceros Australis

A couple of weeks before the apocalypse, Jonny was invited by Cruceros Australis to spend four nights on board their vessel, the MV Stella Australis, travelling through the fjords and glaciers of Tierra del Fuego from Ushuaia to Punta Arenas. In this blog I’ll attempt to give you an idea of what to expect so you can decide whether it may be for you or not!

Jonny specialises in travel to South and Central America, as well as Antarctica.

Cruceros Australis have two boats, the Stella Australis (built in 2010) and the Ventus Australis (built in 2017). They’re almost identical and I think it’s worth saying from the outset it really doesn’t matter which boat you are on! Both operate regular four-night cruises from Ushuaia and Punta Arenas, as well as an eight-night ’back to back’ itinerary. Departures are from September to April, but if you want to see penguins it is best to go from November to March. 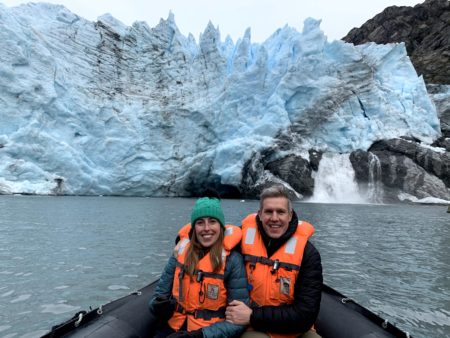 Ventus and Stella Australis are both mid-sized expedition ships which have been designed to navigate the frigid waters of Tierra del Fuego. I was amazed how comfortable life on board was and how attentive the crew were. Both can accommodate up to two-hundred passengers, split between one-hundred cabins. They have a multi-lingual crew and it’s not uncommon to have more than twenty different nationalities of guests on board.

Whether you’re travelling form Punta Arenas to Ushuaia or vice-versa, each day there are different activities planned. Weather permitting, most involve disembarking in the zodiacs, but there are also activities where you don’t need to leave the boat. One afternoon we stayed on board as the captain navigated the Garibaldi Fjord, positioning the ship so we had a wonderful view of Garibaldi Glacier carve in front of us. Whilst navigating, the guides give daily presentations on topics ranging from the first navigations of the area, to glaciology and knot tying. Presentations are always split by language and take place in one of the different lounges on board the boat. Groups for activities are also split by language, so you will always be able to understand your guide. 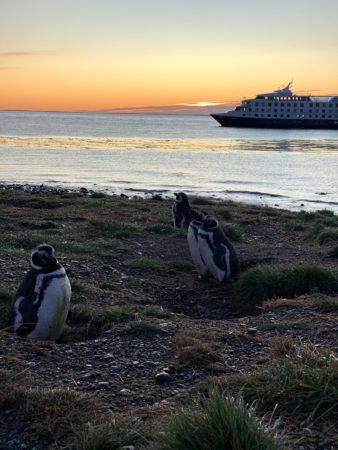 Although most guests on board were retired, Australis cater for all and even have special discounts for families. Most activities were designed to offer three different levels of exertion. A relatively ‘light’ activity was suitable for all and then there was a slightly more demanding option and finally one which often involved you wishing you were back at the bar.*

*A slight exaggeration, but even for the action men and women amongst us there were some trails which we really made you get a sweat on.

Not every activity was like that thought and each day there would be a briefing about the plan ahead and the different options. The guides would outline exactly what would be involved and then guests can choose whether they want the easy, middle or harder activity. It meant you always felt fully prepared about what to expect and could mix and match what you did. Group sizes varied, but would normally be around fourteen per guide. 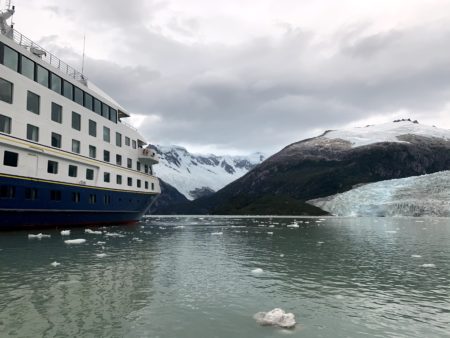 Although Australis get you off the boat as much as they can, ultimately the distances covered by the boat means a lot of time is spent on board. There is no internet, but the good news is there is a well-stocked (and open!) bar. The communal areas have been furnished with comfortable chairs and sofas and there are large windows so you can enjoy the views whilst you go through the entire cocktail menu.

Coffee and snacks were readily available in the lounges, but you really didn’t want to spoil your appetite for lunch or dinner, which was always something to look forward to. 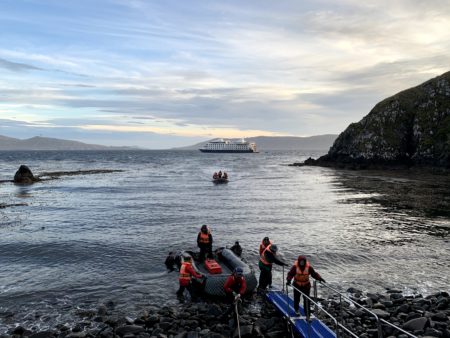 Feeding up to two-hundred guests plus crew is a military operation, but you can tell Australis have been doing this for almost thirty years as everything was incredibly efficient. The head chef on board was Peruvian (if you have tried Peruvian food before, you know this is a good sign) and had come up with a fantastic menu, full of variety and plenty of it. From typical South American food like ceviche and empanadas, to the famous Patagonian Lamb and pastas, the food was hearty and delicious. Meals were accompanied with delicious red and white wines and our waiter (you’re designated a waiter at your table) made sure we never went thirsty!

Breakfast and lunch were both buffet and dinner was a la carte, with options chosen at lunch. In line with Australis’ super-efficient and organised approach, guests are assigned a table at the start of the cruise and that is where they will sit for all meals. It’s done by nationality and fortunately the couple we were sat with didn’t ask to be transferred to another table, so we must have been okay company. 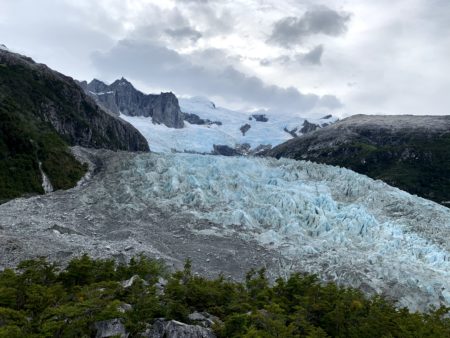 After dinner you could retire to the bar for a nightcap, or some guests went to watch ‘Patagonia’, a documentary which was being screened in one of the lounges. There was also a nightly quiz, where you could show-off how much you had remembered that day.

When it was eventually time to go bed, it was always a welcome sight seeing the freshly made bed in your cabin. It’s worth mentioning that the cabins are split between three decks and are in six different categories. The main difference between them is the deck they’re on. Lower category cabins (B & A) are on the bottoms decks and don’t have as large windows (all cabins have exterior facing windows though). AA cabins (the middle category) are a good compromise between price, views and position but there isn’t a huge difference in cost between categories. The highest category are AAA Superior cabins, which are a deck higher than AA cabins and get the name ‘superior’ as they are 20.5m2, rather than the standard 16.5m2. One advantage of the AAA cabins is you’re closer to the bar. All cabins are en suite and the bathrooms were large enough for two people to brush their teeth at once (I was amazed by this as we had been in the Galapagos recently and I could only just fit in the bathroom on my own!) Beds are either double or twin and extremely comfortable too. All cabins have a chair, desk, couple of bedside tables and a wardrobe, as well as plenty of storage space under the bed. Most of our time was spent out of the cabin, but it was nice to have somewhere large enough you could both comfortably fit in and unpack. 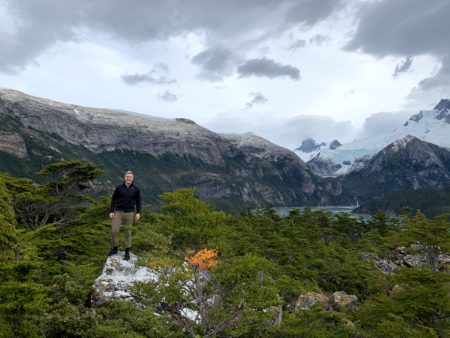 So was it worth it? Yes absolutely. I’d wanted to come on Australis ever since I started working in travel and having sold it over the years, the feedback had always been excellent and I was keen to see for myself what was so special about it. The knowledge, passion and experience of the entire crew really impressed me, as well as the care they took with everyone’s safety and wellbeing on board. The food was excellent, as were the drinks, but for me it was the special feeling of travelling through an area as untouched as Tierra del Fuego. Stepping foot on Cape Horn was a bucket list moment, but on Australis I saw glaciers and national parks I didn’t even know existed. No roads, no hotels, no airports, it’s just you and the people on the boat. What a great way to combine two of South America’s most spectacular countries and you don’t even need to queue up and get your passport stamped (Australis do this for you!) 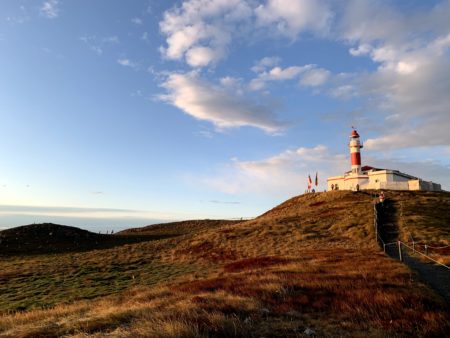 For more details on Cruceros Australis, departure dates and prices, please contact one of the South America specialists.